Choose where to spend your hard earned cash carefully.


We've been seeing and having a lot of discussions about illegal shops on Ebay and Etsy lately. You see these ALL the time. Not necessarily selling scans or copies, but selling unlicensed artwork, like Disney, Harry Potter, Game of Thrones or Dr. Who to name just a few examples, but it extends to thousands of independent artists as well. Many stitching groups are now making it policy not to allow members to even post pictures of their WIPs or finishes if they've used an unlicensed chart or haven't gotten the proper permissions to create their own charts. Why is this such a big problem?
Well partly because it deprives the original artist of deserved income. Legitimate designers will either buy a license or work out a royalty arrangement with artists and copyright holders to be allowed to reproduce their intellectual property in cross stitch. These shops in question do nothing of the sort. They find a picture they like on the internet and run it through a pattern program, save it as a pdf and sell it without any regards to who actually owns the picture.

The reason these sell so much is because they're cheap. When you're not paying to use the picture legally, you don't have to charge as much. And the difference in time spent is enormous. Legitimate designers spend hours and hours on each chart. These guys spend a few minutes on it.
It's not a small problem either. These shops are selling hundreds and hundreds of these unlicensed charts. See the example attached. One is a legitimate shop selling original or licensed works and has been in business on Etsy for about 15 months. The other is an example of an illegal shop on Etsy, selling ripped off artwork from Disney and others, which has been in business about a year - their sales are more than double. And there are hundreds if not thousands of these shops all over the net. 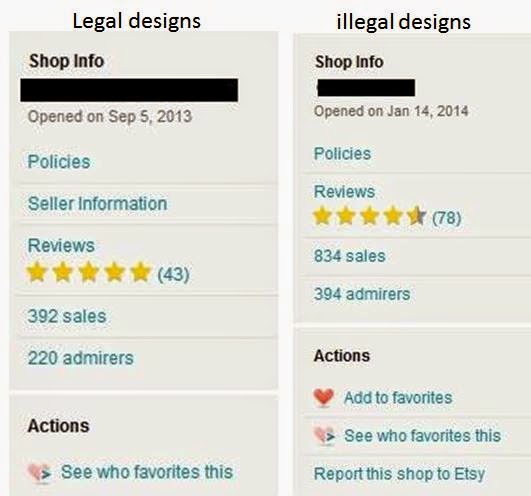 Much as we'd like to have them all shut down, the copyright owner is the only one who can do this.
I spend a couple hours a week sending notifications out to various legal departments, artists and designers about these. Inevitably though, within a day or so of one of these shops getting shut down, they just start up again somewhere else or under a different name.

This extends to free stuff too. There are lots of sites out there that like to make up freebies of game, cartoon, movie or television characters and give them away free. Just because no money is changing hands doesn't make it legal. That also means it extends to personal use. If you find a picture you want to use for cross stitch and it isn't already a chart, you should always get permission from the artist or copyright holder. Without permission you are risking legal action, it doesn't matter whether any money has changed hands. Many groups have gone so far as to disallow posting of self-made charts as well for this reason.

The best thing you can do as a stitcher? Buy from legitimate sources - reputable designers or shops - and if you see something that seems suspicious, don't keep quiet about it. I know all the copyright discussions can get really tedious, believe me, I have at least one every single day, but sometimes a little education on the matter can go a long way.

And if you're uncomfortable speaking up yourself, we're only a message away.
Posted by StopCopyrightAbuseNow at 2:34 AM

The Material On This Site

Please feel free to copy and use the material found on this site for educational purposes on your own blogs and websites.

If you are here, you either simply curious or concerned about the industry. Keep up with news and insights by becoming a follower. And please add this blog to your own blog lists!